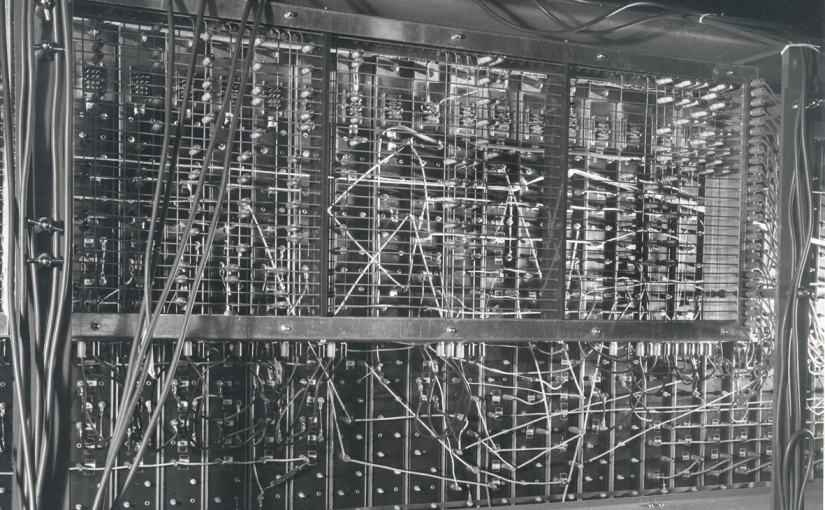 One question that been bubbling up is the Turing-Church theorem, and its potential implied limitation on the possibility of machine intelligence (i.e. the limits of logic and computation). The prospect of interactive computation escaping this limitation seems like a particularly promising thought, one which aligns nicely with some of the thinking Walter and I have been doing on what we are referring to as the “bidirectionality” of abstraction in the mind.

Here Jeff Hawkins (founder of Palm, Treo, and now Numenta) suggest in the title of the below lecture that his HTM (Hierarchical Temporal Memory) machines can “Computing beyond Turing.” One has to be a bit skeptical of whether we are really getting beyond Turing here. As the final questioner points out, this whole thing is running on a Turing machine, after all. The name itself jumps out – can a fundamentally hierarchical system ever go beyond Turing, or are we once again turning the world into so many trees (in Christopher Alexander’s sense of the word)? In fact, as Hawkins admits near the end of the lecture, his system is in fact less general than the Turing machine – a hierarchical system can only solve hierarchical problems – it is all nails to a hammer. Certainly the human mind has the capacity for a whole range of non-hierarchical “leaps”. It does open an interesting set of questions about the “inherently hierarchical organization of the world” as no doubt many key problems (at least one that can be monetized in a straightforward manner) do tend towards hierarchical characteristics, but again, we must wonder to what extent this is due our own projections into the world (and the projections of our long history of rationalization machines – from money to maps to machines). But in any case, Hawkins certainly brings some interesting approaches, and I will definitely explore the software in so far as it is available.

One side note, just noticed as I enter into this world of Neuroscience + AI research – the characters are quite an interesting bunch. Brilliant no doubt, and all quite polyglot, as you would expect. But particular as well. From “Theme Park” to AI…sure why not? From Palm Pilot to AI… what else would you do…? It does beg the question: is AI research the new-age, post-dot com success mid-life crisis dream job de jour? And for that matter, what is the impact of the business-driven approaches that underpin many of these efforts at realizing AI. How does this monetization of the technology impact was is produced?

Beyond the obvious TED Talkers, it will be interesting to dig into some people who are operating at a bit more of a theoretical level, whatever that might mean.

A few more videos that may (or may not) shed some light on the Turing incompleteness limitations:

Along with the Glass Bead Game, Douglas Hofstadter’s classic book Godel, Escher, Bach represents a key point of departure for this thinking about the fundamental properties of mapping, both as a mental construct, and as understood in and through the city. In particular, the possibility suggested by this book that any formal system of sufficient complexity has the hypothetical capacity to exhibit some form of  self-awareness (self-mapping). This runs counter to the suggestion that Godel and Turing’s incompleteness theorems undermine the possibility of machine sentience. For Hofstadter, the secrete of the “recursive I” arises precisely out of the inescapable incompleteness of the system (which is itself rooted in the recursive nature of that system), it is not some magical, unique property of the brain. I need to revisit the concepts here, but my hunch is that this kind of representation of self-contradiction is necessary but insufficient cause of sentience. A formal system understood in itself, outside of interactivity with a larger environment, can never make the jump out of itself.  Recent thinking in interactive computation point in this direction.

Here is a series of courses organized for high school students by some MIT undergrads, really well done and thoughtful:

and a couple of lectures by Hofstadter himself, including this gem from the Stanford Singularity Conference in 2011:

A nice little rabbit hole here. What happens to Turing incompleteness (and the argument that it renders machine intelligence impossible) once machines start interacting directly with the world? Finite State Machine (and non-determinant FSM’s) also seem quite useful going forward.

The famous Church-Turing thesis attempts to define computation and computability in terms of Turing machines. However the Turing machine model only provides an answer to the question of what computability of functions means and, with interactive tasks not always being reducible to functions, it fails to capture our broader intuition of computation and computability. While this fact was admitted by Alan Turing himself, it was not until recently that the theoretical computer science community realized the necessity to define adequate mathematical models of interactive computation. Among the currently studied mathematical models of computation that attempt to capture interaction are Japaridze’s hard- and easy-play machines elaborated within the framework of computability logic, Goldin’s persistent Turing machines, and Gurevich’sabstract state machines. Peter Wegner has additionally done a great deal of work on this area of computer science.